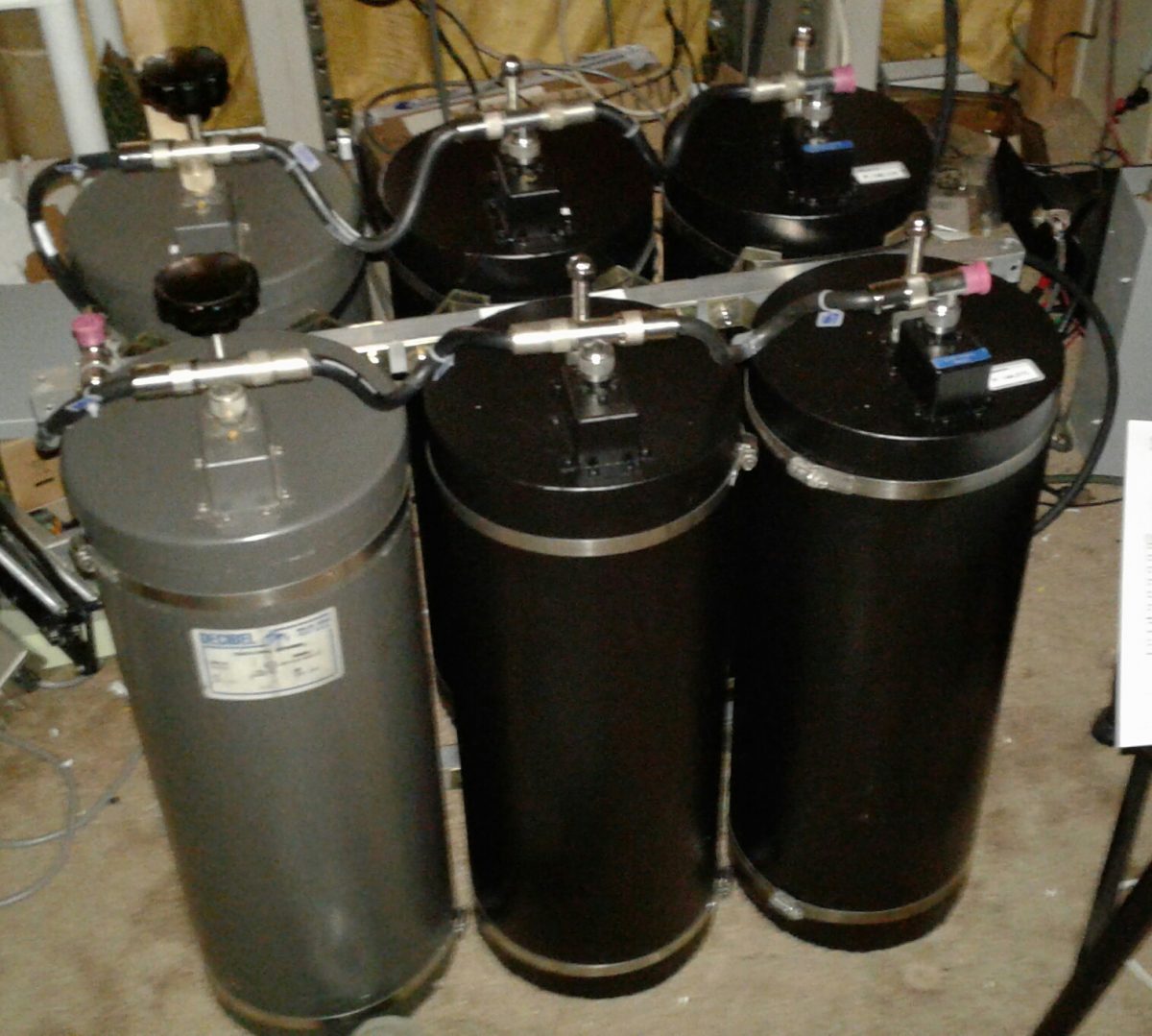 Doing so involves a fair amount of time and work, including total overhaul of each cavity, custom manufacturing of the correct length loops, capacitor replacements, and the building of a new frame for the expanded 6-cavity set, not to mention final tuning and performance testing.

After disassembly of the old cavities, one of the many steps in the overhaul and conversion process involves getting the tuning plungers back in good

shape. As can be seen in these photos showing the plungers before and after the application of some TLC, the difference is more than visible. So is the resulting performance and ability to be accurately tuned (and for that tuning to remain stable.)

In order to obtain the best cavity SWR (lowest insertion loss) along with the maximum branch notching/isolation performance, the copper loops in one

branch of the duplexer assembly have to be replaced with loops of the correct length. At DuplexerRepair.com, we handcraft the replacement copper loops. We start with high quality, 30-mil copper and carefully cut, shape, drill, and polish the replacement loops.

During the installation of the new, replacement loops of proper dimensions for 2-Meter operation, we also replace the trimmer capacitors. This is actually a delicate process, as these capacitors do not tolerate excessive heat. It is quite common for us to discover signs of overheating from the combination of the original capacitor installation, soldering, and RF heating over time (mistuning, high SWR, and lightning will destroy these capacitors pretty easily.)

The original 4-cavity frame and mounting rails for assembling the cavities into a set have to be replaced in order to accommodate six cavities. We

With all the components overhauled and reassembled using the new frame and mounting rails, each cable, Tee-connector, etc. is inspected and cleaned

or replaced as necessary.

A complete conversion, expansion, and overhaul job such as the ones described here, commonly involves between 15 to 20 hours of labor, plus

materials. It’s not exactly cheap, but the results are worth it. What usually starts out as a 4-cavity 4060 “C” model (not built for factory spec operation in the 2-meter Amateur radio band, and often a set which has failed and been pulled from service) becomes a great working 4062 “B” model — as though it left the factory as a set intended to work to specs in the 2-Meter band. The 4-cavity 4060 models are rated at 80 dB or more of branch isolation; whereas the 4062 6-cavity sets are rated for 100 dB or higher isolation. At the typical 600 KHz “split” used in 2-Meter band, this extra isolation makes a world of difference, especially at transmitter power levels above 40 watts or so, and can be a game-changer when trying to get better performance out of certain repeaters, such as the Yaesu Fusion DR-1/DR-1X series, which tend to have lower receiver selectivity compared to most of the commercial grade repeaters with highly selective physical filtering on the front-end. Very often we deal with duplexers sent to the DuplexerRepair.com labs with complaints of “They worked great for years with our old Mastr II repeater running 40 Watts, but when we bought and installed a new Fusion repeater (or D-Star repeater, DMR  machine, etc.) everything went to crap.”

We deal with such all the time. And we’re here to help. Call or contact us if you’re experiencing similar problems. We’ll be delighted to help you get things working the way they should. As they say, “A chain is only as strong as its weakest link.” Duplexers which aren’t up to the task will result in a poor or totally useless repeater setup. It doesn’t have to be that way. We’re here to remedy that.